SMACCMPilot is compatible with a wide variety of RC transmitters and receivers, as long as they provide 6 or more channels and PPM output. We will describe three sample RC control systems which we’ve successfully used with SMACCMPilot.

The FlySky FS-TH9X ships with the Iris+: 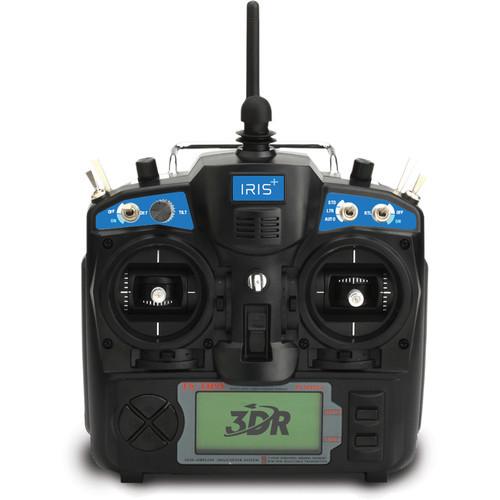 The 3-position MODE SWITCH is located on the right side of the controller, and the pilot operates it with their right index finger (while keeping the right thumb on the roll/pitch stick). The modes are:

The 2-position KILL SWITCH (labelled as THROTTLE CUT) is your best friend. Located at the left side of the controller, it is operated by your left index finger so you can keep your left thumb on the throttle stick. You should always have a finger on the kill switch. When engaged (push away with your index finger), the vehicle immediately kills all the throttle and stops the motors. When disengaged (push towards you) it allows the vehicle to be armed.

Your radio should be configured exactly as follows: 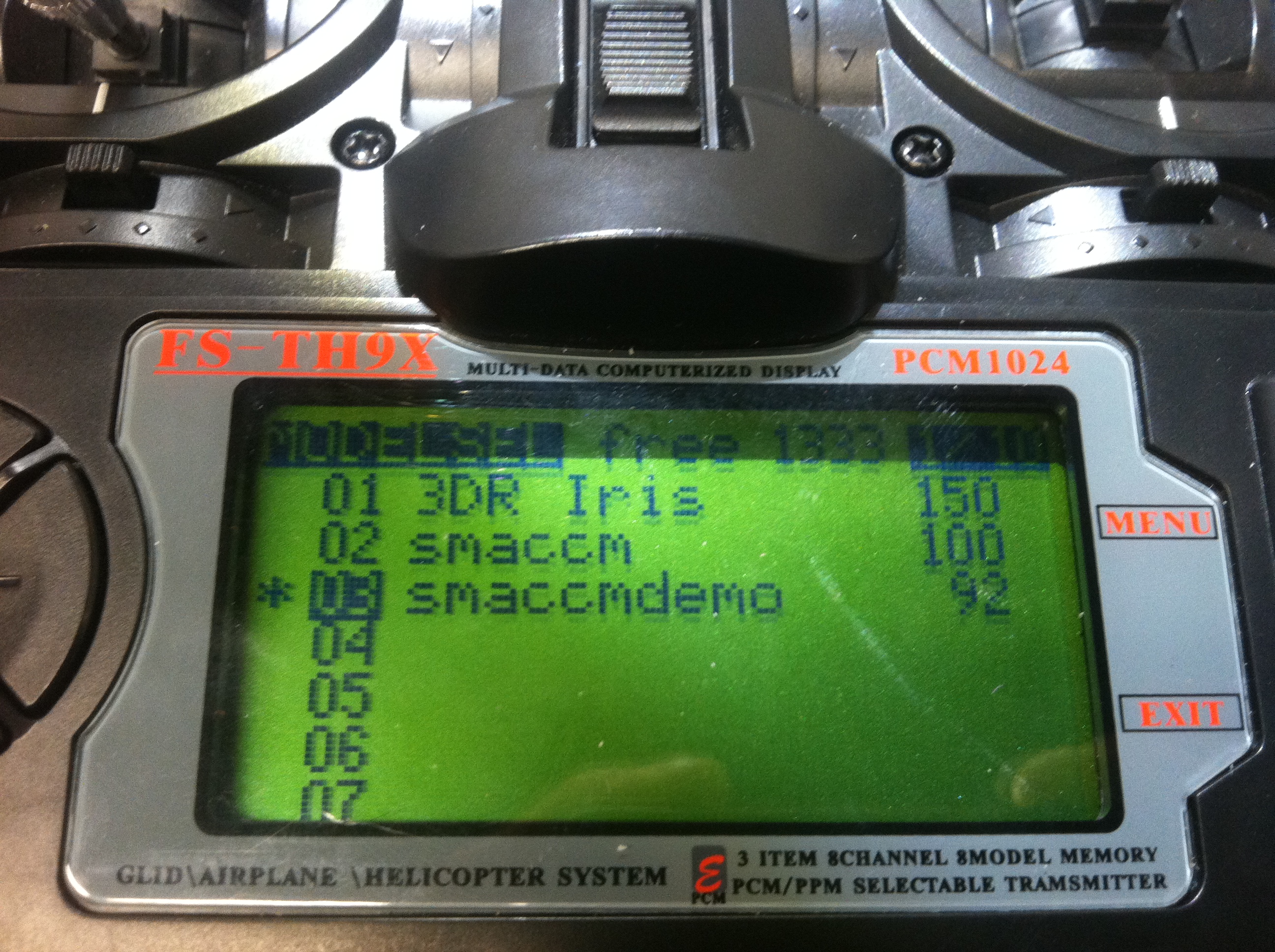 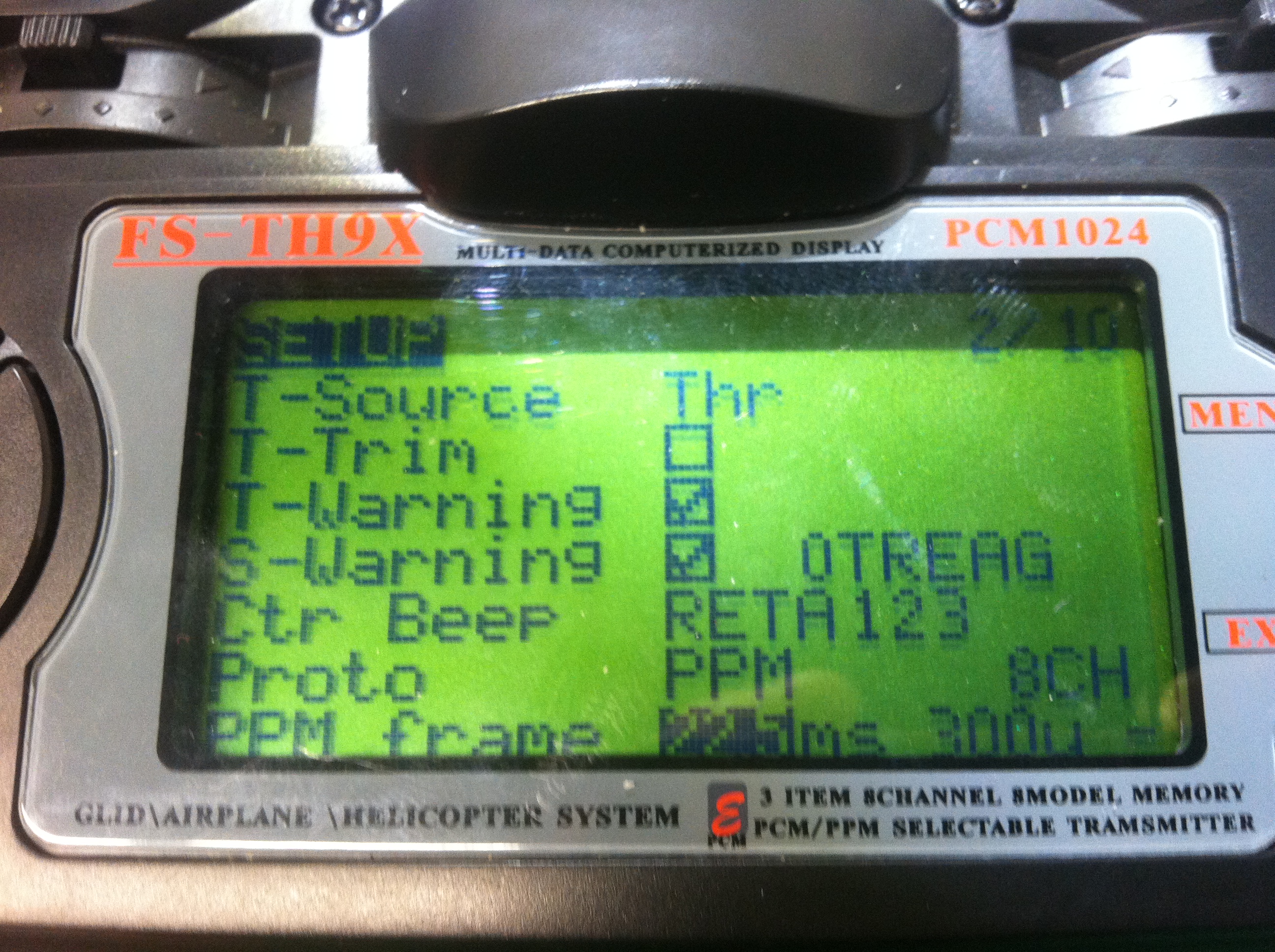 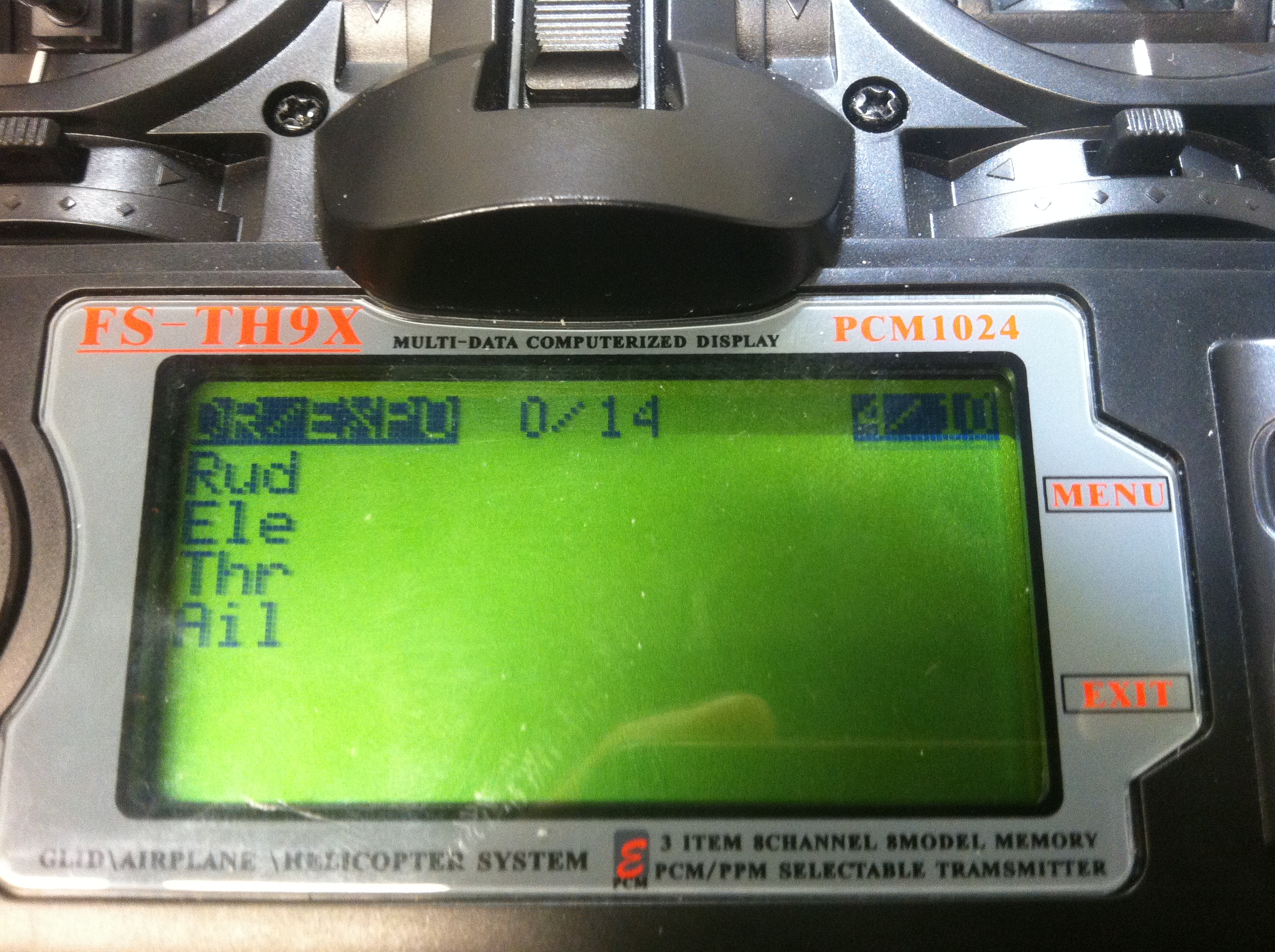 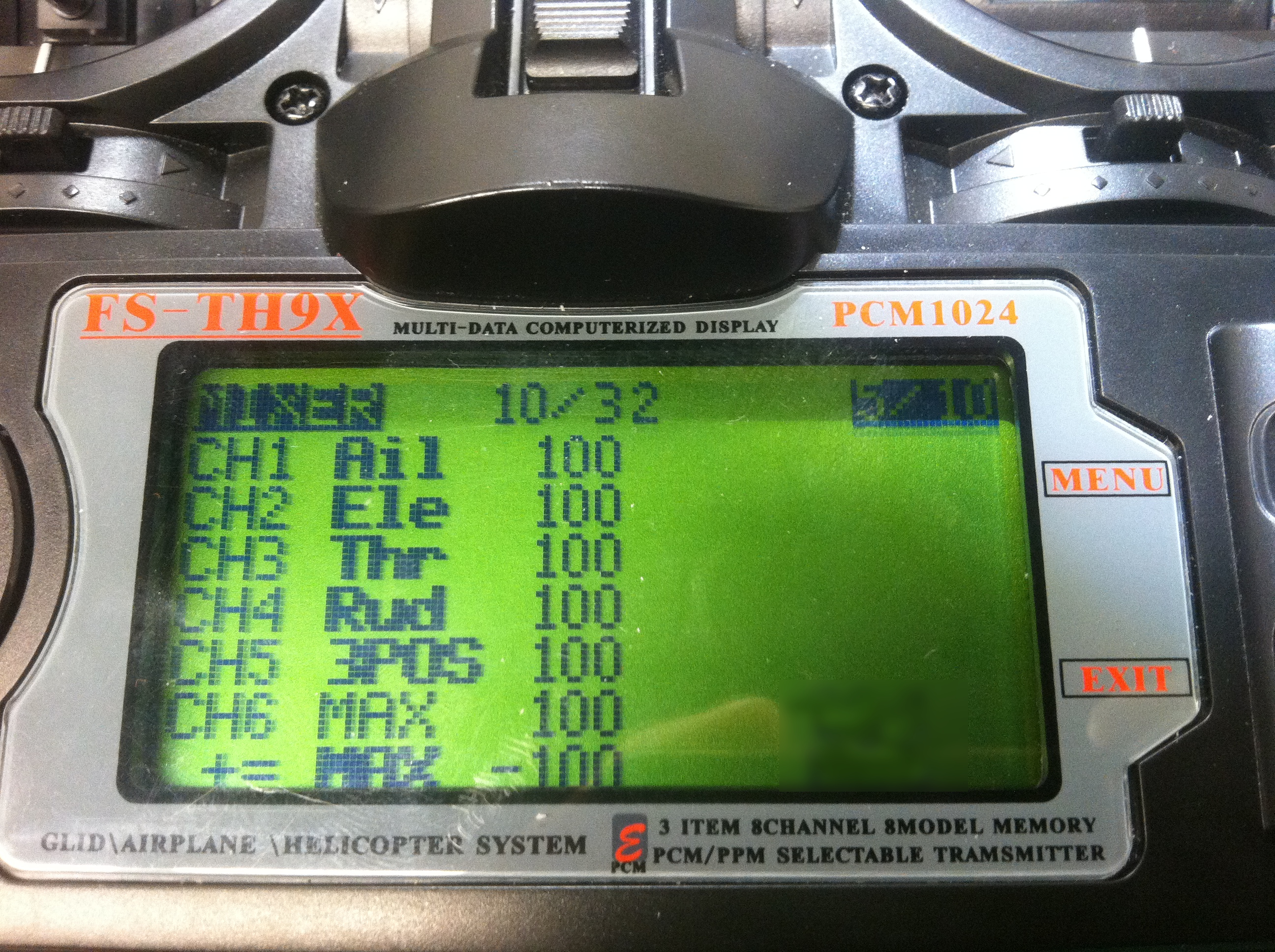 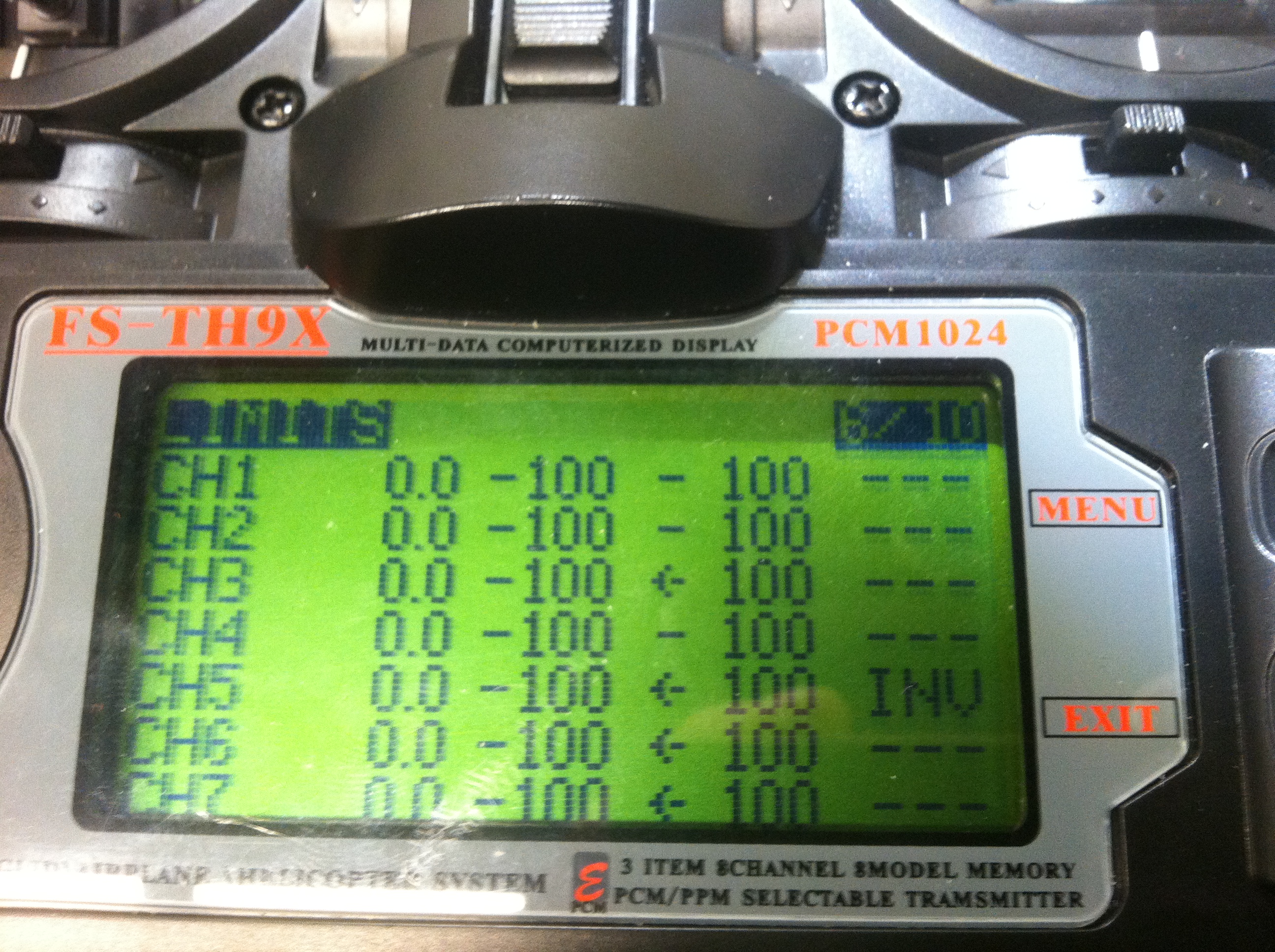 FrSky recently released the Taranis, a transmitter which is compatible with their range of recievers. It has a better build quality than the Turnigy 9XR, and comes with a rechargable transmitter battery & wall wart charger. As of this writing (Nov 2013) the Taranis is sold by Aloft Hobbies in the US, but is in short supply.

The FrSky D4R-II receiver is small, inexpensive, and offers PPM output. However, the PPM output is only valid when the user limits their use to only 6 channels. Please be sure to set channels 7 and 8 to output a low pulse width (1000us) when using the D4R-II module.

On our shopping list page we recommend the Turnigy 9XR radio. The 9XR is one of the least expensive radios which can be configured with all of the features required for SMACCMPilot. The aesthetics and build quality leave something to be desired, but it gets the job done.

The 9XR is designed to take interchangeable radio transmitter modules for inter-operation with various radio receivers. The simplest way to get a radio system with the PPM capability we need is with FrSky radio modules.

The FrSky DJT transmitter module is compatible with the 9XR transmitter. The FrSky D4R-II receiver is small, inexpensive, and offers PPM output. See caveat about the D4R-II in the FrSky Taranis section above. 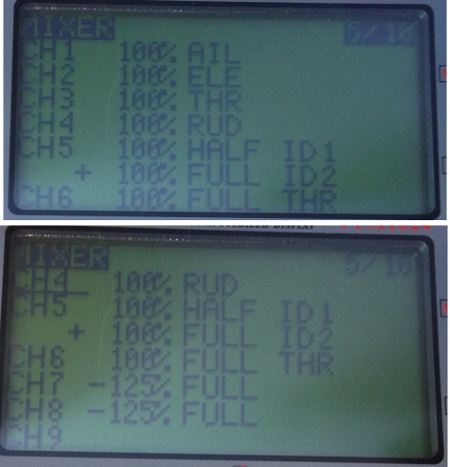